Create a teacher account and distribute your classroom code.

When students enter the code the learning sets automatically download to their iPads.

Toggle on the learning sets you want to practice and begin play.

Futaba Classroom Games is a student centered application that promotes learning by strengthening key K-5th grade concepts in a fun and competitive manner. Up to 4 students can cooperatively learn using just one iPad. Students race to match answers to text or image based questions presented before them. Win 3 rounds to be awarded a Futaba! (a small seedling).

Take a look at the following screenshots to see how some of the questions are displayed:

Create Your Own Questions

While the app comes with a bunch of great learning sets, the real power of Futaba is that you can make your own learning sets. You can even include your own audio with each question.

Parents, teachers and even students themselves can create their own content using images, text, and audio.

Take a look at the following screenshots to see just how a new question can be created:

Take a look at the following screenshots to see just how a many sets are included in the app:

The following video reivew by iPadagogy gives a great insight into how Futaba Classroom games can be used in a classroom environment. It also gives detailed instructions on how to create your own games.

Find answers to all your questions in our easy-to-use instructional iBook guide available for free on the iTunes store.

With the Futaba Cloud Service you can easily share Games you’ve created with other users or your entire class. After sharing a game, simply copy and paste the game or class code on another device to download it from our webservice.

Using the Futaba Cloud Service, Games can be easily synced to multiple devices in just a few seconds. Students can get up to date, relevant content to help support all types of learning activities.

What People are Saying About Futaba

(Geek Dad, Wired.com)
“It is great to see developers responding to their experiences with their apps and listening to parents and teachers to help them design apps that best meet the needs of children.” -Daniel Donahoo

Editor’s Choice Award in the August 2012 Edition of the Children’s Technology Review with an overall rating of 90%. 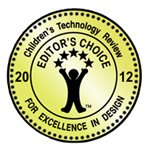 Creating flexible word games with Futaba
“Word games have long been heralded as a way of stimulating the brain, improving language skills and helping increase concentration and logic, and Futaba is no exception to this…. ” -AvatarGeneration

“We had the pleasure of using Futaba in a year 1 class last week. As the school does not yet have iPads we showed the teachers and Principle what they can do with iPads. We featured Futaba and had the entire class join in. In this particular case we only had 1 iPad between about 20 students so we had the Ipads display up on the projector. We had the teacher controlling the iPad in practice mode and had the students shout out what they thought the answer was. They absolutely loved it”. – Guy Jackson

The 12 Best Children’s Educational iPad Apps Released In 2012
“…a powerful concept for the iPad, engaging multiple players in fast paced games for the classroom or home. You can easily add your own content and create your own game based on any theme you choose. This is an amazing option for teachers to implement and customize to whatever they are studying.”

A powerful concept for the iPad – (Feb 29, 2012)
“What makes this game such a STANDOUT is that kids “play” cooperatively and it’s FUN. The competitive edge can be used to promote academic growth.”

Read the review in full at Teachers with Apps

The Future of Classroom Technology – February 26, 2013
“Futaba Classroom Games for Kids is a shining example of the growing trend. It is truly one-of-a-kind; the content is customizable from skill level to uploadable graphics, and up to 4 players can play at one time…. At $5.99 the app may seem like an expensive download but it could very well take the place of a range of different educational apps that are currently being used by your young learner. It also means that students can share one iPad instead of needing their individual device, which we all know are costly. For those that are teaching their kids at home, Futaba Classroom Games can also replace expensive homeschool materials.”

INKids will be updating this app constantly with new learning sets (hopefully every quarter), so if you’d like us to make something to go with your curriculum we’ll do our best to have our artist draw them up and add them to the next update). Send your requests to support@inkids.org

Tell us what you think by completing this short survey.